I've wanted a 1992 Custom Cruiser for some time. Limited production and being the last ever rear drive V8 powered Oldsmobile, drew me to this particular year. But I like the 1991's too, very little difference between the two (and only) years.

So anyway, I periodically browse through eBay to see what they have in the way of b-bodies and parts. On 12 May of this year (2005) I came across this '91 CC being auctioned off as a parts car and just over the river in Maryland. Starting bid was $250. I contacted the seller to get some additional pictures (which you can see below) and inquire as to the condition of the car. The seller responded stating that the car was rear ended last winter (2004) and that earlier this spring, the owner ran over a wheel (not tire) that fell off a truck thus damaging the front end.

I began to ponder purchase of the car. I had several days before the auction ended and at this point, there were no bids. I figured for $250 or even $300, I could part the car and make that back and then some. I also began thinking that assuming only panel and sheet metal damage (no frame or major structure) the car could be repaired with minimal work and expense. I inquired of the buyer again asking if the car was mechanically functional. He stated that it was and in fact was still being driven in it's current condition! He also guaranteed in the auction that it would not be DOA.

So I continued to watch the auction until the last day to see if the bidding would drive the price up. Only one bid was made about a day and a half before the auction end. So I put in my bid and won the car for $255. My schedule prohibited me from getting the car until the next weekend so I put down my deposit and planned to pick up the car the following Saturday. Obviously only having the word of the seller I prepared myself to be calling AAA halfway home for a tow and set out with my housemate to pick up the car. We arrived and found the car exactly as described. The engine fired right up and ran very smoothly. With 3/4 tank, I headed the 90+ miles home with Gene following me just in case something broke. Well, the car performed flawlessly and we got the entire way home with no problems. The engine did get a little hot in some slower traffic, this was expected as the shroud for the cooling fan was gone due to the front end damage.

With CC home, I began to ponder it's future. I decided that I'd have no idea of the car's true condition until I got the damaged parts off or opened so I could evaluate any possible further damage. So Memorial Day weekend, I began to take the front end apart. I could see no visual damage to the frame and all of the doors opened and closed without issues. Looking at the rear gate, and crawling around inside and under the car, I figured that the gate itself was totaled but the car was still structurally sound. During the next week or two I debated whether to part the car or fix it up. I came to the decision that I would fix him up and at the very least make a beater out of the car.

Below is a pictoral timeline of the car and it's ongoing status. Click the image for a larger version. Thanks for looking!
Mike 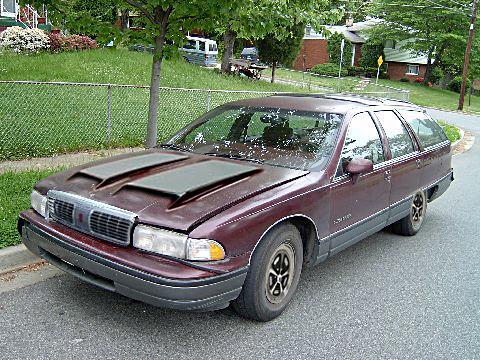 A possible future for Project CC?

© Copyright 2005-2009 Michael Prosise. The materials contained on this site may not be duplicated, or reproduced without the express consent of the owner.