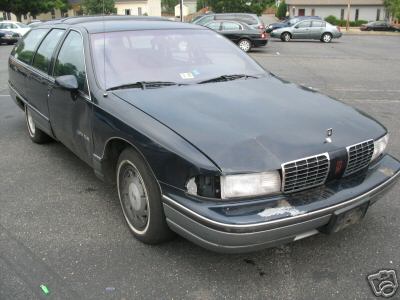 I am constantly searching eBay and other sources for wagons. This should, of course, come as no surprise to anyone reading this site. Well, in August of '07, I came across a reposessed 92 Crusier being sold at a "Buy here, pay here" dealer in Fredericksburg, only an hour and a half from me. Taking a look at the pictures and the description of the car I figured it would make an excellent parts car what with it being the same color as mine and such. The seller listed the car as a 5.0 liter V8 and, in these cars, that is a bit underpowered. Thus I didn't see much value in fixing and reselling it what with the sheet metal damage visible from the pictures.

So I bid on the car and was outbid near the end. I felt that $400 was all I wanted to pay for a parts car and the other bid about $50 higher. The next day I received an email from the seller. Apparently the winning bidder backed out, stating that the car was 'too far away to get'. Now tell me, how stupid is that? I mean, the location of the car is clearly stated in the auction? Dumb buyers. Anyway I was offered a 'second chance' at my last highest bid and accepted.

My sister agreed to help me "relay" the car back home. So I drove the hour to her place and she rode me the remaining half hour to Fredericksburg. I paid for the car, jump started it (read more later) and drove it the half hour back to her house with no problems. I left the car there and went home. The next day, my sister was kind enough to drive the car to my Mother's house, a little out of the way but a good location to store the car until I could get it home. The wagon sat a Mom's house for several weeks. On Labor Day weekend, I went to the house, installed a headlight (so I could drive home in the dark), jump started the car again and drove it the hour home.

End of the story? Stripped it for parts? No and NO! I, at the time, was stripping a 1996 Cadillac Fleetwood for parts so the Crusier was parked in the driveway until that project was done. Well my goal of finishing the Fleetwood by Thanksgiving was more or less met. So the Fleetwood hulk was hauled away and I rolled the Cruiser into the garage to begin looking it over. Well the first thing I found was that the car is not the 5.0 liter V8 but the, more powerful, 5.7 liter. Yippie! I crawled under the car a bit and the undercarraige showed almost NO signs of rust! This was certainly no 'rust belt' car. I then began to inventory what was wrong with the car. I found a number of issues but nothing which would cause me to want to strip a car that was looking increasingly like a nice fixer-upper or at the very least a decent beater car.

So based on what I have found so far, yes I'm still looking, I plan to keep the car as a replacement for my Roadmaster which is rusting itself away to nothing. Read on below for the ongoing saga!

Click the image for a larger version.
Thanks for looking!
Mike


As of March 2008, both engine accessory brackets as well as the serpentine belt have been replaced too. 'BlueTwo' is officially road legal! The hood was swapped during the summer of 08 with the original (and dented) hood from 'Blue'. Not perfect by any means but it will suffice until I decide whether 'BlueTwo' gets repainted the original color or something else. I also bought another box of 'bulk' Dynamat Extreme (man that stuff is expensive!) which I used to finish off the entire cargo area. I have just enough left to do the right rear door too once things warm up. This made a huge difference in reducing the road noise inside the car.


© Copyright 2008-2009 Michael Prosise. The materials contained on this site may not be duplicated, or reproduced without the express consent of the owner.