I've always had a passion for cars. I grew up with and learned to drive on my Dad's truck, a 1978 Ford F-150 with a 460 big block. My first car was a 1974 Chevy Nova. It had a 350 which I rebuilt I also did body work and painted it twice. I guess my Dad got me interested and involved in car stuff when I was a youngster. He showed me how to change oil and other maintenance on our cars when I was growing up. My tastes in cars has varied over the years but I still most enjoy the classic American Muscle Car.

I've put this page together to, more or less, document my cars and such. Enjoy! 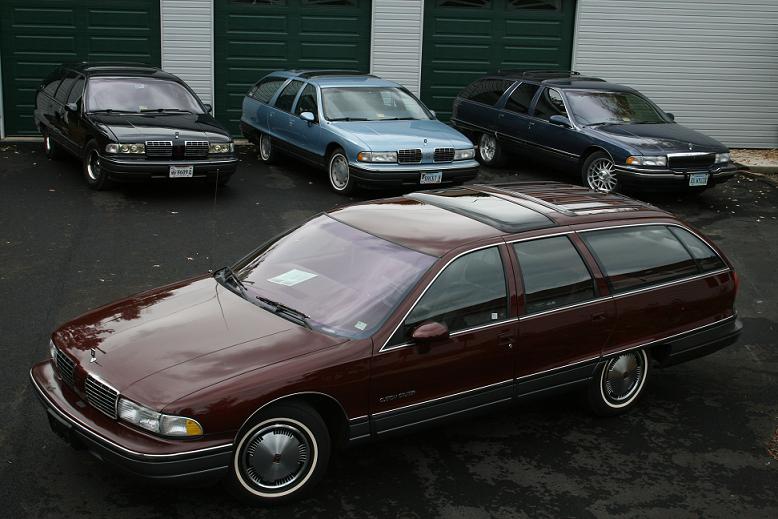 I'll post more of these later. For now, here is a picture taken with a couple friends and I with my Nova and a bike.

I was never able to even get this car on the road. I really liked it though. It had electronic fuel injection, front disk brakes and a fully automatic transmission, in 1970! I haven't found any pictures of the car yet but I know I've got them somewhere.

Yeah, I actually had a Bug. It was fun to drive, I rebuilt the engine and had the seats reupholstered. Never got the body work done, it looked pretty rough.

Unfortunately, I don't have any pictures of this car, only had it for a year and traded for the '93.

Not a particularly sexy car but it was incredibly durable and kinda fun to drive.
GrandAm 1
GrandAm 2

This pickup was given to me by a friend of Dad's. I didn't have it for too long as I never really had the money to restore it. It was fun to drive though, had a V8 and a 3 speed column mount shifter.
This is a really good shot of it in front of my Grandmothers barn.

No pic's of this one either. I liked this car but it was a bit of a lemon.

I bought this car from a neighbor and drove it for a couple years. I really enjoyed it. I could haul just as much as one of those SUV things and it got way better mileage and handled quite well for a wagon. I gave it to my Mom when I bought the 2002 Alero.
Click here for a front shot taken Summer 2004.
This is a rear quarter view, you can see the Impala parked next to it.

Well finally sold the Alero. A close friend of mine bought it and you'll possibly see it tooling around the Detroit, MI area.
We drove up Skyline Drive the day after Thanksgiving 2003, boy was it foggy!

I got "Project CC" roadworthy which was my original goal. Now that I've begun restoring 'Blue' I really don't have more time for the 91. A friend of mine wanted it so she is now using it as her daily car.
If you would like to read the history of "Project CC", click here.

What a great car this one has been! Bought with 180K on the clock and sold with over 242K. Put some money into it, sure. But he took me wherever I needed to go, never died on me once. But it was time. He Was starting to need some repairs that I simply felt weren't worth the money. So I traded it in at North Star for another 96 Roadmaster with half the miles (and a bit more rust). I'll keep the original pictures and page here for your reading pleasure.

Another incredible vehicle. Purchased in 2005 and I've done absolutely nothing to it other than gas, oil changes and a set of wiper blades. But we found a 3/4 ton V8 pickup which is really more suited to our needs. Good bye to a great pickup!

I had never really intended on keeping this car for a long time. Longer than eigth months though! Since Fred found a heated cloth wagon for me, one had to go and this made the most sense. I'll keep the original pictures and page here for your reading pleasure.

Well, with fuel prices at the $4/gallon mark, I reluctantly decided that I should have at least one smaller car in the fleet to save a little bit on gas. I'm not quite ready to do the four cylinder thing so a V6 was the goal. As I just don't care for front wheel drive cars, I started researching rear drive V6 cars. Surprisingly (or perhaps not so surprisingly) there aren't that many available used that aren't 20 years old. So I started looking at used Cadillac CTS cars. I ended up finding one that was very well priced and appeared to be well cared for. So I made the trade. While I'm quite sad to see the Fleetwood go, despite the many repairs done on the car, it will be nice to have a slightly smaller gas bill. I'll miss all that chrome though! Click here to see the archived page of my Fleetwood.

You can go here to see the archived page of (formerly) my SS. I will truly miss this car. I've owned it longer than any other and have many fond memories. The SS started my interest in the final iteration of GM's B-Body line. I still have three of them. But as time moved on, I just drove the car less and less. So in the interest of allowing another enthusiast to enjoy the car, I knew it was time to sell. May the new owner have as much fun and enjoyment as did I!

Well, I was able to trade the CTS in for a brand new Caddy. My first (and probably last) brand new one. I didn't do much to this car but here here is it's page for archive.

'Blue' was to be a restoration project which just got side tracked too many times. Here is the build page that never quite got finished. The car is soon to be off to Canada for it's next life!

Well, I just got 'BabyBlue' on the road and had to let her go. With the acquisition of 'Red' I just couldn't keep both. I was able to work out a good deal and 'BabyBlue' is enjoying her new home in South Carolina.

Letting this truck go was a difficult decision for me. My Dad ordered this truck brand new, both my Sister and I learned to drive on it. I wanted to do a full restoration on the truck but time, money and other projects just kept pushing this down on the list. It's now safely in the hands of my Sister and her family. They are already working on getting the truck back up to snuff. The very brief web page I built for it can be found here.

I got the Caprice running and enjoyed driving it around some. But the work required to really fix up a car this rare was not within my budget and time allowance. So the decision to let him go was made. For posterity the page is here.

I really enjoyed this car, it was problem free and took me all over the place. Of course being a rare bird made me enjoy him all the more. However his age and northern roots were starting to show. Another case of too much interest and not enough money or time. I hope the new owners get plenty of great memories and much use from him. The Roady's page can be found here.

© Copyright 2004-2010 Michael Prosise. The materials contained on this site may not be duplicated, or reproduced without the express consent of the owner.